The use of steroids in the sports world is a topic that generates a lot of controversies. We all have heard about a rising star who appeared to be “natural”, but whose incredible results ended up being a result of taking illegal performance-enhancing drugs.

Cases such as Lance Armstrong’s scandal have made the public more suspicious when it comes to amazing transformations and superhuman feats of strength, endurance or other physical qualities. That’s why, when some people look a Jinder Mahal’s sculpted body, they cannot help but believe that he’s using some not – so – legal supplements.

Furthermore, these suspicions do not only come from unqualified sources. Several fitness professionals and famous bodybuilders have expressed their concerns about the real story behind Jinder Mahal and his relationship with steroids. Natural bodybuilder Nick Miller, who offers tips and information on professional bodybuilding, recently posted a YouTube video where he discusses whether WWE Champion Jinder Mahal uses these illegal substances or not.

In the video, Miller discussed the transformation of Mahal’s physique from normal to what it is today, which preceded WWE’s granting him the main championship in Backlash last month. Nick analyzed the WWE Welfare Policy and showed the list of prohibited anabolic androgenic substances that Mahal could have used to transform his body, explaining that they are officially forbidden under the policy.

Miller then highlighted the part of the WWE Welfare Policy that explains what is needed for a fighter in order for him to have to take steroid tests:

“WWE may require talents to take several different tests, including, but not limited to, urine, blood, saliva, hair and / or breath tests, if there is reasonable suspicion that a WWE talent has violated any part of this Policy or his ability to perform has decreased as a result of the use of any forbidden substance. ”

Nick highlighted four signs that Mahal could be using steroids. They are the following:

First, he observed Mahal’s extreme vascularization. This means that the athlete’s veins are extremely pronounced, in a way that is not common except in cases of steroid usage or in a few very lean individuals. 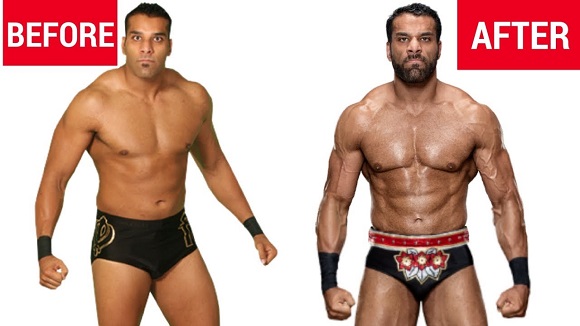 The second sign of Jinder Mahal’s steroids usage is his “almost irrationally extreme level” of low body fat and leanness, which the athlete maintains from fight to fight. Body fat levels under 10% are extremely difficult to achieve, and even more to keep for a prolonged period of time. Furthermore, in most cases having such a low body fat means that performance will be harmed.

Another possible sign of steroid usage in Mahal is the extreme transformation that his body suffered in a short time. Not so long ago, the fighter had what Miller called a “dad body”: strong, but with clear fat over his muscles. Now, after just a few months, he is extremely lean and has a much greater muscle mass.

Finally, Miller pointed out that Mahal apparently had gynecomastia, a condition caused by a hormonal imbalance which is noticeable in the area around the nipples.

Miller concluded his video saying that he believes that Jinder Mahal must undergo any tests necessary to detect the use of steroids. The results of said tests must determine whether or not he should be allowed to be a WWE champion.

Mahal has not departed from commenting on the fact that his body has changed dramatically in the last year, something he attributes to an extreme diet and the complete abandonment of alcohol. The wrestler has also expressed that he has been subjected to doping tests in the WWE and no sign of steroid usage has shown up at all.

Being accused of doping would be terrible for an athlete in the position of Jinder Mahal, who is right now at the top of Smackdown Live and will be the first to challenge the current WWE Champion, Randy Orton. In several interviews, the fighter has tried to silence any rumor about his possible steroid use. While talking about his body transformation, he stated the following:

“Everything is natural. I have followed a diet persistently and to the letter for 3-4 months. I have not eaten anything I should not eat. When I’m on tour, I take my food with me. I always carry around the 5 meals I have to eat every 2 hours. In each one of them, I take between 30 and 50 grams of carbohydrates, and roughly the same for proteins in each meal. I also do cardio 6 days a week, as well as weight training.

Also, I became Straight Edge and I do many Olympic training movements. I do many basic exercises such as squats, push-ups and so on. I will continue to improve not only to see myself better but to feel better. I feel good inside the ring in terms of power and endurance, which is important if I want to be a WWE champion.”

In that manner, Jinder tried to silence all criticism that pointed him as someone who consumed illegal substances such as steroids to improve his physical condition and only focuses on what he can do next week in order to be a WWE Champion for the first time.

However, the controversy is still not settled. If too many professional bodybuilders and athletes start pointing at Jinder Mahal and his possible steroid usage, it wouldn’t be surprising if WWE CEO’s became a bit nervous about it. Public image is extremely important to fighters, whose income depends partly on their popularity. That’s why this kind of rumor can destroy the rising star’s career even before he has reached the top.

We will still have to wait to see how the events unfold. For the time being, however, Jinder Mahal will continue to compete as if nothing is happening, and he will probably try even harder this time in order to make the public forget about the serious accusations about the way he has climbed to the great position he is in right at the moment.

John Cena - Does he take Steroids?